A review of Cool Limbo (NYQ Books) by Michael Montlack 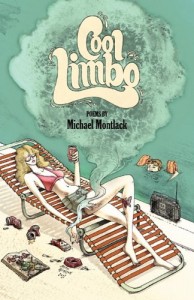 Cool Limbo, Michael Montlack’s first full-length collection of poems, takes some unpacking: Like any great work of art, first impressions can be overwhelming. Montlack brings the whole party to the page, a neon cast steeped in culture war, cognizant of the stakes but willfully indifferent, “unburdened/even by hunger” (“Cool Limbo”). The poems themselves, though, allow the ethical, political, racial, and religious undercurrents some air, and provide the power of speech to the voiceless: “Today I am an electric/tangle of barbed wire/a threat even to my own flesh” (“War Babies”). The apathetic are afraid to face their fears, and too bad for them: Gay people have moved way on, “celebrating/
the shedding/of suddenly unnecessary/shells” (“Fire Island”) and deploying wit in the face of indignity: “Michelangelo painted the chapel/that wouldn’t marry him today” (“Uh, Didn’t You Get the Memo?”). Montlack is deft with his allusions and maneuvers through a lot of language and dialogue without losing perspective; even as Liz Taylor or Steve Nicks make appearances, and Gertrude Stein or Elizabeth Bishop are invoked, Montlack retains a camaraderie with the reader, and allows his playful ear, and the meticulously constructed settings, to imply just how serious things really are. Politically self-aware right down to its structure—the collection is split in two, and cheekily titled “Girls, Girls, Girls” and “Boys, Boys, Boys”—this collection troubles the assumption that any crisis has just two sides, and provides poem after poem of densely layered, beautifully evocative testaments to the “invisible but burstingly alive” (“Cover Charge”). A stellar debut.
—Angela Leroux-Lindsey

The Police Arrest Me Restocking ARVs: Poetry by Akpa Arinzechukwu

The Merchant of Grief: Poetry by Walter Holland

EKAJ: A Sweet Film That Proves to Be Teflon-Tough

ABOUT US
Art & Understanding, Inc. is a 501 (c) (3) nonprofit organization. The mission of Art & Understanding, Inc.’s A&U magazine is to collect, archive, publish and distribute the growing body of art, activism, and current events emanating from the AIDS pandemic. It was created for the HIV-affected community.
FOLLOW US
© Art & Understanding Magazine
We use cookies to offer you a better browsing experience, analyze site traffic, and serve focused advertisements.

Any cookies that may not be particularly necessary for the website to function and is used specifically to collect user personal data via analytics, ads, other embedded contents are termed as non-necessary cookies. It is mandatory to procure user consent prior to running these cookies on your website.